I’ve spent twenty weeks away from the lab, one and a half of those with a creeping infection trying to eat my right arm off at the elbow and a further four of those some form of holiday (except for the four days spent working over those four weeks).

I’ve taken to cycling to work, which takes me down the A13 to Beckton, and then on to the Greenway to Stratford. I’m really rather pleased by the cycle routes available now, definitely improved since I last used to cycle that way about twenty years ago. I’ve only nearly been hit by a white van once.

Cycling to work obviously presents me with a chance to gather data, so data gathering I’ve been doing. I’m using google fit and runkeeper on my phone to log the journey and they both agree it takes between 45 and 50 minutes door to door. I’ve have a better idea when I’ve collected more than a week of riding.Â  The same journey on the Tube would take 45 minutes on a good day and closer to an hour typically. The one thing I’m really missing is the time to read on the train – it’s hard to multitask on a bike.

Only a single Astrophoto worth sharing this week. Five hours integrated exposure on NGC6888Â  – The Crescent Nebula. This is a work in progress project.

It’s what happens when a star sheds a load of gas into the surrounding neighbourhood, then sometime later starts blasting out a ferocious stellar wind, which catches up with the earlier shed gas and ploughs into it with enough energy to make it glow in visible light and X-rays. 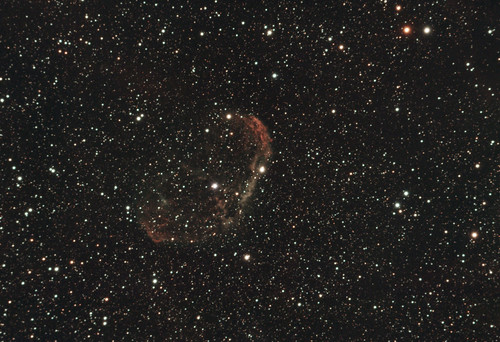