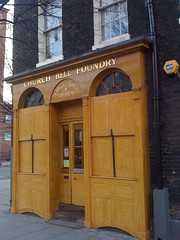 Something like thirty years ago, I was on a bus with my grandfather passing The Whitechapel Bell Foundry; he told me a little about the place and promised to take me for a visit when I was older. Three years ago, I bought a ticket for a tour the following year, then forgot to go. Yesterday I finally toured the foundry with around 25 others, I was probably the second youngest in the tour party – very few other the others were below retirement age.

The bell foundry is the oldest manufacturing company in the UK, having been formed in 1570 (and with good evidence that it may date back to 1420 from earlier foundry works in the area). The foundry site on Whitechapel Road dates from 1738, originally having been The Artichoke coaching inn, built c1670.

The tour was interesting and through, we learned the bell-metal casting temperature, 1170 degrees C; the composition of the casting molds, a brick core covered in goat-hair, clay, sand and horse manure shaping mixture (photo); the number of harmonics a modern bell is tuned for, 5 – the same note in 3 octaves and a minor 3rd and a 5th.

At the back of the works, in the yard, a new set of bells and mounts (photo) were being prepared for St Dunstan in the west.To make best use of limited space, the hand-bell workshop and the woodworking workshop are built above the foundry floor. These workshops have rather low ceilings and beams – no one taller than 5’8″ works there. In the wood workshop where bell wheels are made, is the foundry “graveyard” commemorating those that have died while working (no details give for those, possibly an interesting story) and in retirement.

I’d love to re-visit when they actually cast a bell, but understandably they prefer not to have members of the public around when sloshing tons of molten metal around.

DG visited in 2008, around the time I booked my first, forgotten, tour.

One reply on “Bells”